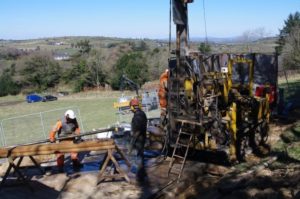 Drilling at Aclare near Myshall as part of one exploration project in Carlow Photo: International Lithium Corporation

HIGH-GRADE deposits of lithium sources have been reported in south Carlow by a British exploration company. Technology Minerals announced details this week of a survey work carried out last week near Graignmanagh in the townlands of Carriglead and Knockeen.

The company described the sampling results as ‘highly encouraging’ for the mineral, which is commonly used in smartphones and electric car batteries.

Alex Stanbury, CEO of Technology Minerals, said the results and ongoing work would help to determine specific areas for targeted drilling as the exploration campaign progressed.

‘Technology Minerals is focused on extracting raw materials required for Li-ion batteries, while solving the ecological issue of spent Li-ion batteries by recycling them for reuse by battery manufacturers.’

Technology Minerals is one of several companies carrying out survey work for lithium deposits in Carlow.

The chances of a mine opening in Carlow are considered very low, but the extraordinary demand for lithium is driving these exploration works.