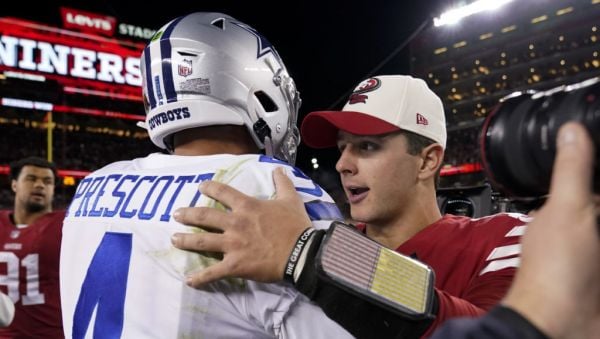 The San Francisco 49ers and the Cincinnati Bengals have both been victorious in their divisional clashes and each moved within one game of the Super Bowl.

Seventh-round rookie quarterback Brock Purdy was the man to get it done for the 49ers, with the 2022 last pick completing 19 of 29 passes for 214 yards as San Francisco finished 19-12 over the Dallas Cowboys.

Purdy’s opposite Dak Prescott had similarly solid numbers in California as he went 20 of 31 passes for 180 yards and also scored a touchdown, though his poor decision-making continued.

Still undefeated.
One win away from a Super Bowl appearance.
Still a 7th-round rookie.

Prescott registered an unwanted record, and continued a run of 13 picks in his last 9 games to end the season, when he became the first Cowboys QB since Troy Aikman in the 1994 NFC championship game to throw two first-half interceptions in a playoff.

The win means the 49ers will head east to Philadelphia, where they will be hosted on Sunday by the Eagles for the NFC championship game.

The AFC championship will be contested for the second straight year by the Kansas City Chiefs and the Bengals, who earlier on Sunday defeated the Buffalo Bills 27-10 in heavy snow in upstate New York.

The home side fell behind 14-0 in the first quarter and never recovered, with Cincinnati quarterback Joe Burrow throwing for 242 yards and two touchdowns as his side extended their win streak to 10.