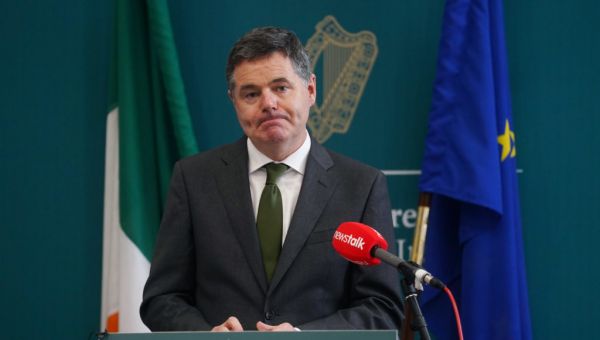 Minister for Public Expenditure Paschal Donohoe has said that he was unaware that people were paid to put up posters before the 2016 and 2020 general election when making official declarations.

He also told the Dáil that an “unauthorised” corporate donation of commercial vans used to hang up posters, worth €434.20, was “unknowingly” received by the Fine Gael branch in his constituency of Dublin Central.

Mr Donohoe said that the amount over the limit has been refunded to the firm in question and the breach has been notified to the ethics watchdog Sipo.

Ahead of the Dáil statement, businessman Michael Stone, who is CEO of the engineering firm the Designer Group, announced he was resigning from two boards.

Mr Stone said he had “mistakenly believed” he had not paid for help putting up posters as part of the 2020 general election, and that he did not know payments for the 2016 general election posters needed to be accounted for in Mr Donohoe’s electoral expenses.

The Dáil has heard that six people were paid by Mr Stone to hang up posters over four dates before and after polling day in the 2016 general election, with the work done before polling day valued at €917.

Mr Donohoe said he should have amended his election expenses in 2017 after he became aware that a corporate van had been used to hang the posters up, which he has estimated to be worth €140.

Giving his second Dáil statement about how it came to happen that election poster expenses paid by a businessman went undeclared, Mr Donohoe said a further amendment would be made to his 2020 general election expenses declaration.

“Despite my best efforts in recent weeks to ensure the fullest account of the support given in both 2016 and 2020 was accurate, an amendment will now be made to my 2020 general election expenses form to reflect the new information to the amount of €864 for labour and €392.20 for vehicles for support received during the election period,” he said.

The minister said he was also now aware that an “unauthorised corporate donation of €434.20” was “unknowingly received by Fine Gael Dublin Central”.

He added: “This was in the form of the use of vehicles, the commercial value of which exceeded the maximum allowable donation limit of €200.

“Sipo have been notified of this breach and €234.20, the amount received in excess of the allowable limit, will be refunded to the Designer Group.

“An amendment will also be made this week to my election expenses to the value of €1,256 for the work carried out and use of the vans up to polling day.”

Mr Donohoe said he had aimed to be “fully transparent” when he addressed the Dáil last Wednesday, when addressing issues to do with the 2016 election postering.

“This was, I believed, the case at the time and the statement I made was an honest reflection of the information I had,” he said.

“It remains the case that when Sipo returns were being submitted in both in 2016 and 2020, they were believed to be accurate, as any postering done throughout the campaigns was not paid for by Fine Gael Dublin Central nor by me. All activity, it was understood, was carried out by volunteers on a voluntary basis.

“Neither I nor my team were aware of any payments to any individuals for the putting up or removing of posters in either election at the time of filing election returns. The vast majority of my posters were erected and taken down on a voluntary basis.

“This was, we believed, to be the case with regard to the support given by Mr Stone. At each point in this, having undertaken reviews aiming to get the full facts, I’ve always taken the appropriate steps to correct the record.”