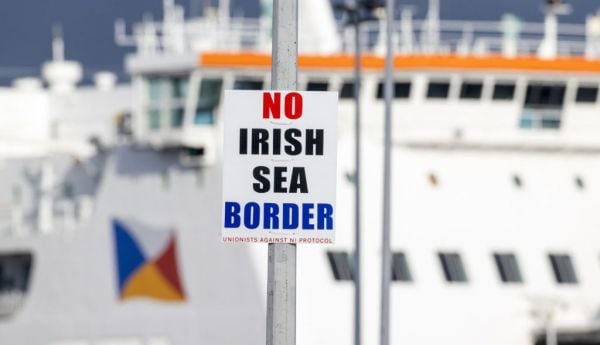 A deal on the Northern Ireland Protocol that does not address unionist concerns about the trading arrangements is bound to fail, a DUP MP has warned.

Gavin Robinson also dismissed speculation that the UK government could move to rewrite powersharing rules to override the DUP’s veto and allow a Stormont executive to be formed in the party’s absence.

London and Brussels have ramped up negotiations aimed at securing a resolution to the impasse over the protocol.

The DUP collapsed powersharing last February in protest at arrangements that have created economic barriers between Northern Ireland and Britain.

The DUP has made clear it will only countenance a return to devolution if radical changes are made to the protocol which, according to the party’s judgement, restores the region’s place within the UK internal market.

That has raised the prospect of the UK and EU potentially reaching a solution that they are both content with, but the DUP opposes.

Stormont’s powersharing rules established under the 1998 Belfast/Good Friday peace agreement mean an administration can only be formed with the participation of the largest nationalist and largest unionist parties.

There has been some speculation at Westminster that the Government may look to change these rules if the DUP maintained its boycott despite a deal being reached by the EU and UK on the protocol.

Such a change could potentially facilitate the formation of an executive even if the DUP declined to take up its seats on an executive.

East Belfast MP Mr Robinson said such a move would be “exclusionary” and he did not anticipate the British government following through with it.

“The idea that you could just rip up entirely the notion of powersharing in Northern Ireland, that we would proceed, or that any government would seek to proceed on an exclusionary basis, must cause pause for thought,” he told BBC Radio Ulster.

“It makes absolutely no sense whatsoever.”

Designed as a means to keep the Border free-flowing, the protocol moved regulatory and customs checks on goods to the Irish Sea, creating economic barriers on trade between Britain and Northern Ireland.

Many unionists in the North are vehemently opposed to arrangements they claim have weakened the region’s place within the union.

While the UK and EU are seeking to find way to reduce the red tape associated with Irish Sea trade, the DUP has insisted that any agreement must go further, and end arrangements whereby the EU sets laws on trade for Northern Ireland.

Mr Robinson said changing the basis for forming a Stormont executive would shatter the foundations of powersharing in Northern Ireland.

“It’s not going to wash and you’ll not see in any circumstance a coalition of the willing built on the proposition of exclusion, because that’s essentially what it would be,” he said.

He added: “If the EU and the UK think that they can solve the current impasse by agreeing a solution that doesn’t touch on the concerns that have been raised by unionists, it’s bound to fail.”

Alliance MLA Nuala McAllister said her party supported the potential of voluntary coalition and the removal of unionist and nationalist vetos on powersharing.

“We have said that if the DUP want to exclude themselves, then reforms should be made so that they should be able to do that and that we could go on governing by parties like ourselves and others willing to take their seats in the government,” she told the BBC.

The nationalist SDLP recently proposed a more minor rule change at Stormont that would potentially enable MLAs to elect an Assembly speaker in the absence of DUP approval.

SDLP MP Claire Hanna said while reform at Stormont was required, it would not be appropriate for the UK government to unilaterally change fundamental rules.

“It’s fair to say change is needed,” she told the BBC.

“The structures unfortunately aren’t delivering very good government, even when they’re not being held back by veto, and the Good Friday Agreement provides for change and has been changed a couple of times in the last two and a half decades.

“But that should be done in a managed way and in as an inclusive a way as possible, rather than a unilateral stroke by London.”

Traditional Unionist Voice leader Jim Allister added: “I think it’s the richest of ironies that those who want to celebrate the Belfast Agreement the most are now those who want to rip the powersharing heart right out of it, I think that is quite incredible.

“And they want to do that for the purpose of coercing unionists into accepting a protocol which operates on the basis that GB is a foreign country and we must be subject to foreign laws.

“I don’t know any unionist of credibility who is prepared to operate Stormont on that basis.”