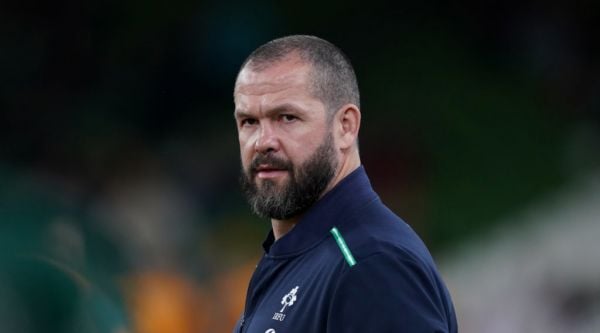 The RFU announcement last week has been met with criticism, with England internationals Joe Marler and Lewis Ludlow joining amateur players and coaches in expressing concern.

The move comes amid growing focus on how head impact exposure and concussions affect players’ health.

Groups of amateur and ex-professional players have brought claims against rugby bodies alleging they negligently failed to protect them from concussion and non-concussion injuries that caused various neurological disorders.

“If you are ever just saying to a kid ‘you need to tackle lower’, then you become even more vulnerable in my opinion,” said Farrell.

“If you’re just sitting there with your arms in front, trying to wrap, with your head down, you’re a sitting duck.

“The coaching and technique of how it’s applied to tackling below the waist is absolutely crucial, otherwise we’re going to have a serious problem.”

Ireland flyhalf Jonny Sexton, speaking at the Six Nations launch on Monday, said the rule change may actually increase the number of concussions in the sport.

“Of course we need to get the head shots out of the game, but the tackles we really need to take out of the game are the reckless, out of control, sprinting out of the line,” he said.

“It’s not like you can’t get concussed by chopping someone’s knees. I see a hell of a lot of concussions from people getting their head on the wrong side, a knee to the temple or a hip even to the side of the head. So, I strongly disagree.”