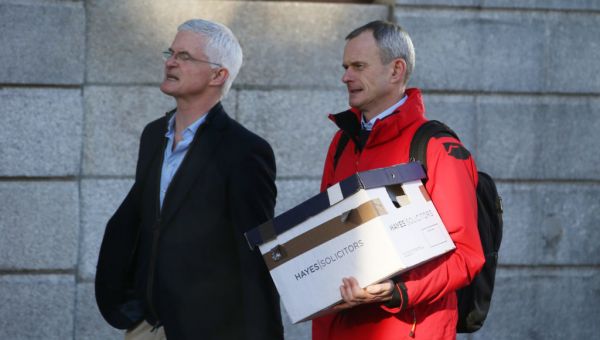 A shared wall dividing two Dublin 4 houses, which was at the centre of a dispute over noise nuisance, was built in accordance with a pre-construction agreement, the High Court has ruled.

Mr Justice Alexander Owens dismissed a claim brought by Daniel Hoban, and his father Joseph, for trespass and nuisance arising out of how the party wall at the Pembroke Lane, Ballsbridge property was built.

The Hobans claimed their neighbours, brothers Mark and Frank Cassin, had not complied with a pre-construction agreement that two separate walls, with a gap between them, be built. A single 9-inch wall was built.

The court heard Daniel Hoban and his wife abandoned what he said was the beautiful new home because he and his wife were upset and traumatised by the noise problems from next door. Following the birth of their first child, they never returned to the house.

The two houses were built at the same time after the Hobans and the Cassins agreed at a May 2008 meeting to choose the same builder to build on the sites of what were formerly a coach house and a mews property.

Daniel Hoban said at that 2008 meeting between him, his architect and the Cassins’ engineers, it was also agreed that two walls with an air gap would be built.

The Cassins, and their engineers, denied this and said there was no such discussion or agreement, and it was always intended to build a single wall.

The Hobans’ architect, Frank Elmes of St Laurence Park, Stillorgan, who had also been sued, settled the case they took against him for allegedly failing to properly supervise the build.

On Wednesday, Mr Justice Owens said he did not accept Daniel Hoban’s evidence that there was any agreement to build two walls during the 2008 meeting.

The judge accepted the evidence of the Cassins’ engineer, Kevin Rudden, that in 2008 Mr Rudden’s firm was in contact with the Hobans’ architect about a plan which showed only one wall.

On the balance of probabilities, he was not persuaded by Mr Hoban’s evidence whose memory of the 2008 meeting he said was poor.

It was also coloured by the fact that he was disturbed that he later found out that the single wall that had been built was located entirely on the Hoban side of the boundary, he said.

He did not accept Mr Hoban’s evidence that there was a concern about noise and a second dividing wall at the 2008 meeting because if there had been that would have been discussed with the Cassins.

He accepted the Cassins’ side evidence that if there was to be a second wall at that stage, it would have necessitated a redesign and a possible delay in the appointment of a builder.

The builder was provided with an agreed plan which he tendered for and the builder built in accordance with that plan which contained only one wall, he said. If a second wall had to be built, it would have to be reflected in a change in price to the tender documents.

He accepted Mark Cassin’s evidence that if the Hobans had wanted the second wall, it would have been provided because the Cassins were building a high-spec house.

He did not believe an on-site meeting took place during the build, as alleged by Daniel Hoban, in which the Cassins and the builder decided to drop the second wall on the basis that it would have been “overkill”.

He also found that if there is an agreement on the location of a dividing wall, as there was in this case, then there can be no issue of trespass.

The court heard the noise issue came to a head in 2013, four years after the Hobans moved into the house, when the Cassins moved a family with three children into their property.

Mark Cassin and his family, as well as a French couple, had occupied the Cassin house up until then and Mr Cassin said no complaint was made about noise, but Daniel Hoban denied this.

The judge said the Cassins could not be responsible for loud tenants and nobody claimed they were noisy.