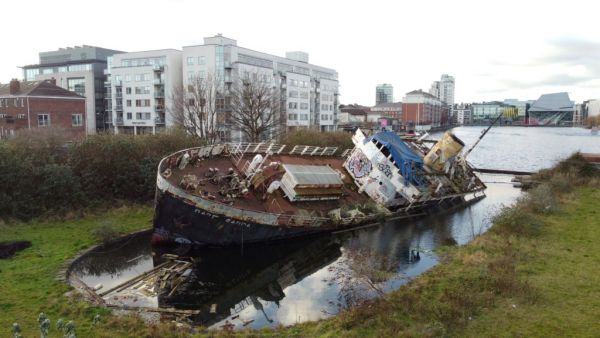 An old ship that ferried people to and from the Aran Islands decades ago has capsized in a Dublin dock.

The MV Naomh Eanna was built in Dublin in the 1950s and was the main mode of transport connecting Co Galway to the Aran Islands from the 1960s until the 1980s.

The vessel also featured in the 1996 film Michael Collins.

Despite plans to salvage the ship being mooted over the years, including making it part of a Maritime Quarter in Dublin, it has been left to languish in Dublin’s Grand Canal Dock.

Irish artist Nathan Wheeler, who is researching derelict sites across Ireland, said the ship would now cost a lot of money to restore.

“The ship has capsized,” he told the PA news agency.

“The time to fix this was 10 years ago – now it’s obviously got a hole in its hull.

“From what I’m looking at, from the pictures… it looks like it’s actually sitting on the bottom of the graving dock because it’s not that deep. It was only meant for much smaller ships.

“So it’s kind of sitting perched up. Now it’s basically going to sit there… I wouldn’t be surprised (if) nothing happens (to it).”

He said people have campaigned in previous years for the vessel to be treated as a national monument.

“(They argued) this ship should be saved, should be in the public ownership and should be preserved in a museum.

“I was talking to Aran Islanders – they have very fond memories of the ship,” he said, adding that relatives of the Naomh Eanna’s captain still live on the islands.

“Aran Islanders have great memories of it, it was a huge thing down there,” he said.

“To me, this is the face of dereliction in Ireland, and it’s a much bigger issue.

“It’s not just a ship. It’s a symptom of a much larger problem of… we see buildings being abandoned all the time, and we ignore it. And now we see a massive ship being abandoned.

“It’s just such a juxtaposition: right down there in the middle of the ‘Silicon Docks’, you’ve got Irish maritime history just rotting away and it’s normalised.

“No-one knew anything about it until the whole thing fell over. It’s wild when you think about it.

“We mustn’t leave our history as abandoned rusting hulks, because if we do, there won’t be anything left.”