SETU Carlow bowed meekly out of the Sigerson Cup on Tuesday evening after a second half goal glut from home side University of Limerick.

The warning signs were there for Carlow as early as the second minute when only a brilliant block by Josh Moore prevented Aaron Griffin from scoring an early goal.

Goalkeeper Matthew Byron went on to make two excellent saves in the first half to keep out shots from Ciaran Downes and Mark Lenehan but the half ended with Limerick comfortably ahead by 0-6x to 0-2 by the break.

The goals flowed in the second half as the Carlow defence was breeched time and time again.

Griffin scored in the 34th minute and then hit the net twice to finish the game as a contest.

Limerick man Tommy Griffin scrambled home a goal for in response but the home team cruised into the quarter-finals as Sean McDonnell scored their fourth goal with ten minutes to go.

Colm Hulton scored three points for Carlow, including the last, and Carlow’s best, of the game. 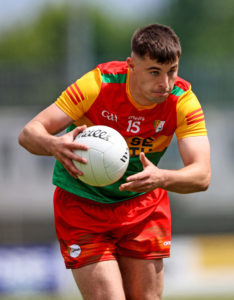