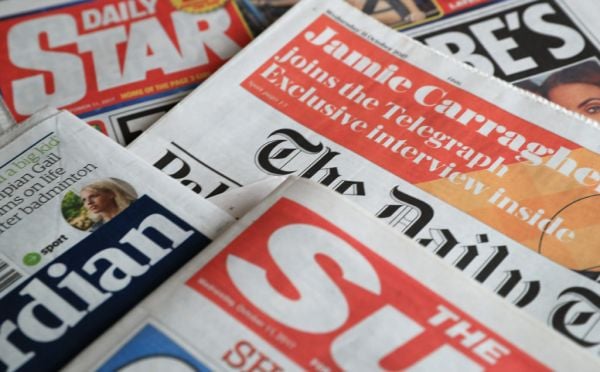 Here’s a look at what the papers are covering on Wednesday morning.

The Irish Times and Irish Independent lead with the latest on the Paschal O’Donohoe controversy — on Tuesday, he admitted that he did breach electoral rules. 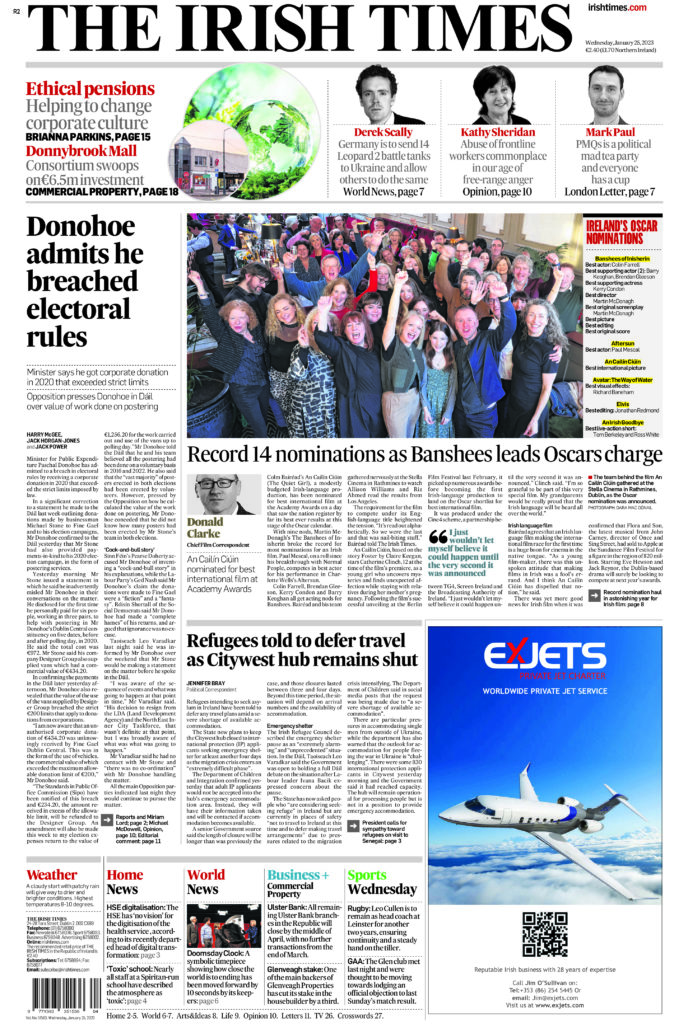 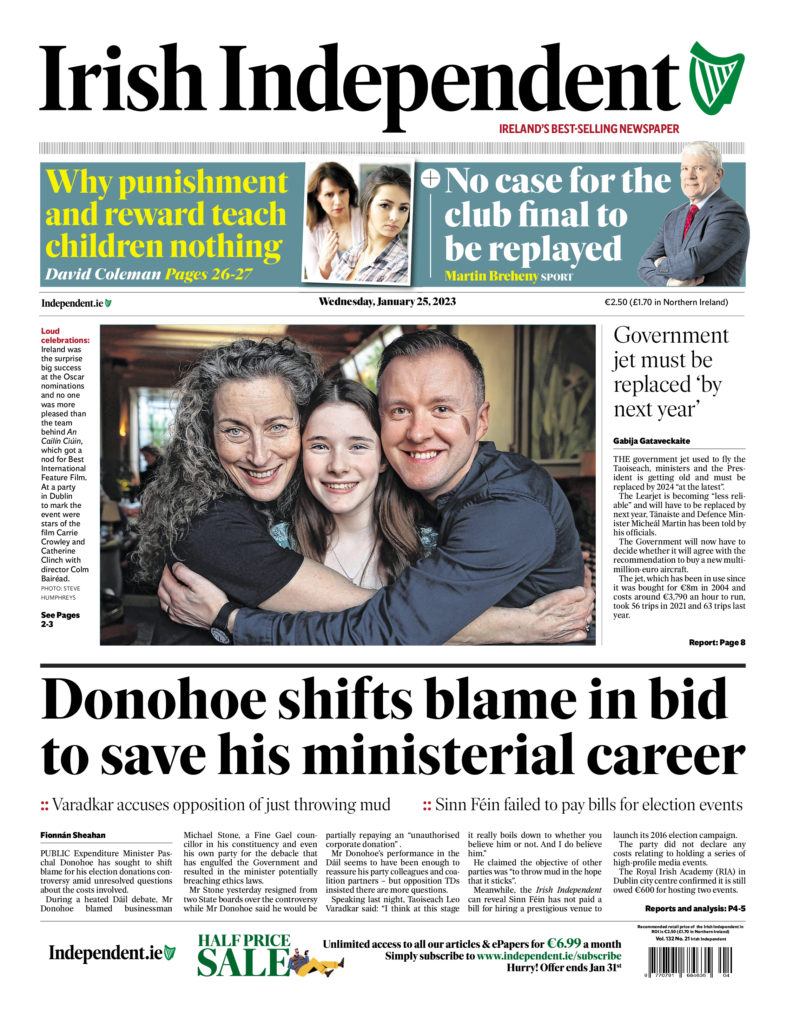 The Irish Examiner leads with a front page spread on the Oscar nominations, after a phenomenal day for Irish film. 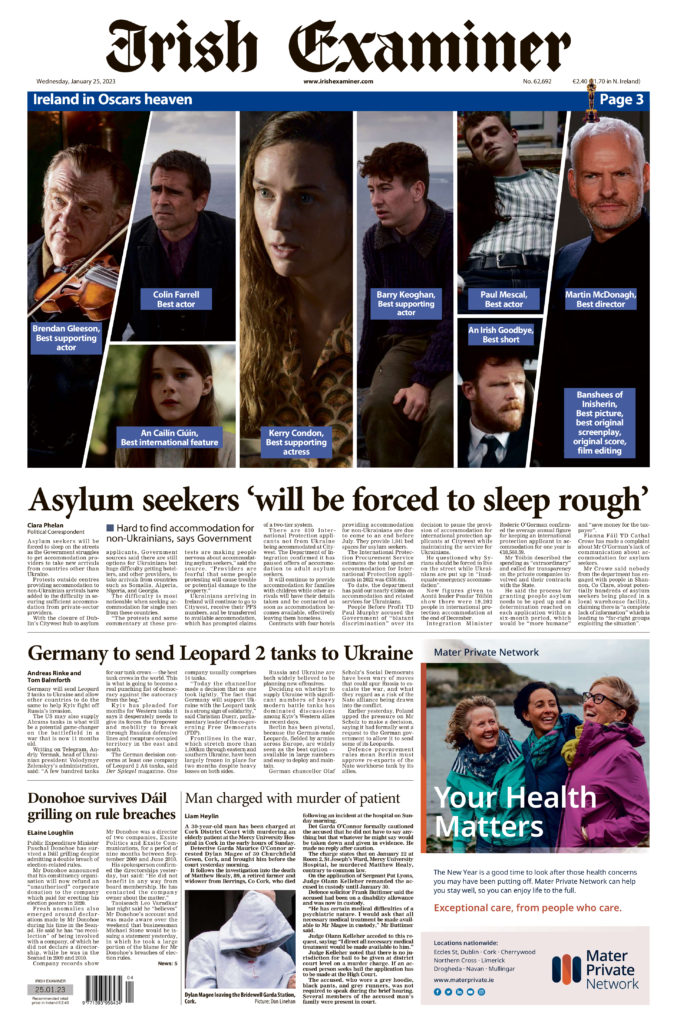 The Herald has a story about MMA fighter Conor McGregor. 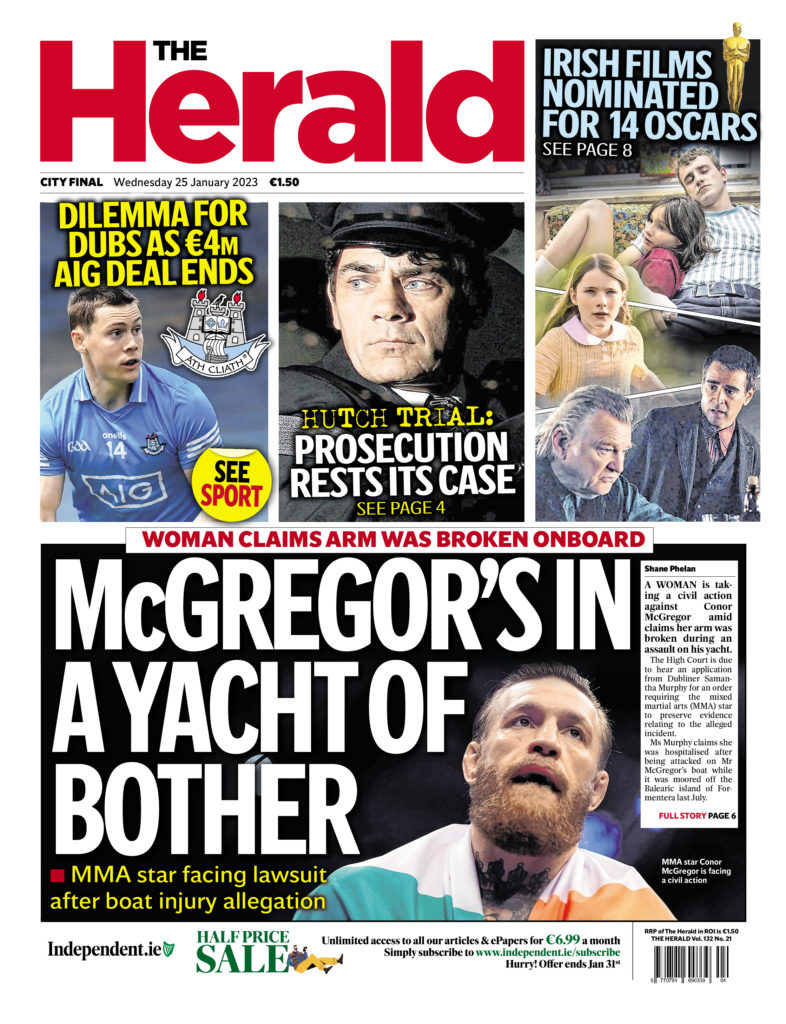 The Irish Daily Mail reports that employers face being charged to keep staff parking spaces in Dublin city under new proposals from the National Transport Authority.

For all the big news and sport, plus your brilliant Inspire pullout, pick up a copy of Wednesday’s Irish Daily Mail, or click on https://t.co/wKUyK4AHpD pic.twitter.com/hcwm6yrv2p

Across the water, financial concerns about the UK’s future dominate the front pages.

The Guardian and Financial Times report Germany has agreed to send battle tanks to Ukraine, in a move described by The Daily Telegraph as a “hammer blow” for Russian leader Vladimir Putin.

‘ ‘Hammer blow’ for Putin as Ukraine gets tanks’#TomorrowsPapersToday

Citing the statistic that every six days someone is killed by an offender on probation, the Daily Mirror asks “when will the Government address these deadly failings?” following Zara Aleena’s murder.

Britain’s prospects for growth have declined and left the Chancellor with a multibillion-pound hole ahead of the March budget, reports The Times.

The i has been told Jeremy Hunt was left “suprised” at the extent of the spike in public borrowing, which was prompted by the Government capping energy prices this winter.

The i: Treasury rules out tax cuts after being surprised by UK’s record borrowing. #TomorrowsPapersToday pic.twitter.com/GunfHeREfd

The Daily Mail calls on Mr Hunt to deliver a growth plan after the national debt hit £2.5 trillion.

A think tank claims in Metro that the north of England is being badly neglected despite promises to “Level Up” the region.

‘Vast inequalities’… and divide getting worse despite levelling up, report warns#TomorrowsPapersToday pic.twitter.com/62QFeF8MWQ

Mr Hunt is warned in the Daily Express against increasing the stage pension age 11 years earlier than planned.

Front page: Be warned! Increase our pension age at your peril #TomorrowsPapersToday

The Sun leads with horror stories of freezing temperatures and other tough conditions on the set of a new game show being shot in the UK.

On tomorrow’s front page: Netflix’s real-life version of Squid Game turned into a freezing nightmare with at least one contestant stretchered offhttps://t.co/QhtgVyuQAC pic.twitter.com/ZyktT4KbTP

And the Daily Star carries a warning over the espionage potential of smart gadgets.