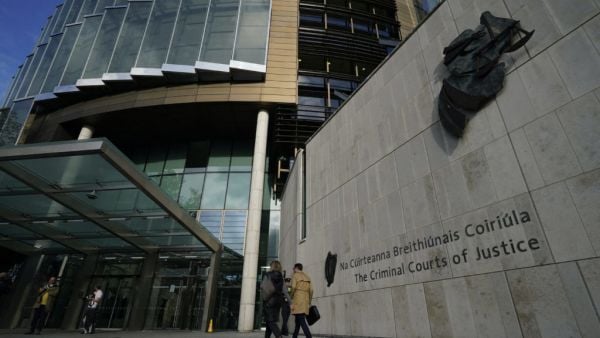 A woman who was allegedly trafficked and required to work as a prostitute in rural Ireland amid threats and a “debt bondage” situation has told a jury that she often kept a knife close by to defend herself from violent clients.

The woman, who cannot be named for legal reasons, was giving evidence in the Dublin Circuit Criminal Court trial of Natalia Nogueira Da Silva and Ivanilce (Lisa) Vailones Fidelis.

She told the court she was moved to a different rural town every week and that in Enniscorthy, Co Wexford, a man tried to break into the house, while in Tralee, Co Kerry, “the men there were very violent”.

She also outlined a situation in Portarlington, Co Laois, when a client demanded his money back and beat her up after the service was provided. It was this incident that led to her decision to always keep a knife by her bed.

Ms Da Silva (32), of Cairn Hill View, Drumlish, Co Longford, has pleaded not guilty to one count of human trafficking a woman at an unknown location within the State, on dates between March 31st, 2019 and May 18th, 2019.

She has pleaded guilty in front of the jury to one count of organising prostitution at an unknown location within the State on dates between December 5th, 2018 and May 18th, 2019.

She has also admitted one count of facilitating the entry into the State of a person she knew to be illegal on March 31st, 2019 at Dublin Airport, along with 33 counts of money laundering the proceeds of crime on dates between March 2020 and May 2021.

Ms Vailones Fidelis (46), of Castle Manor, Racecourse Road, Roscommon, has pleaded not guilty to all 18 counts against her.

She has denied two counts of human trafficking two women at various locations within the State on dates between December 2018 and May 2019. She has pleaded not guilty to one count of organising prostitution during the same time period.

Ms Vailones Fidelis has further pleaded not guilty to 14 counts of money laundering the proceeds of crime on dates between January 2015 and December 2020 and one count of removing proceeds of crime from the State during the same time period.

The State alleges the two accused trafficked two vulnerable Brazilian women for the purposes of exploiting those women and taking advantage of their vulnerability “to such an extent as to cause the trafficked person to have no real or acceptable alternative but to submit to being trafficked”.

Garnet Orange SC, prosecuting, told the jury they would hear the women were in a “debt bondage” situation, whereby they owed money for their plane tickets and other expenses and were being charged “exorbitant” rent for their accommodation. The prosecution also alleges the women were threatened.

The first complainant in the case continued giving evidence on Wednesday. She has given evidence that her plane ticket was bought by a woman named Lisa and that she was met at the airport by a woman named Natalia and brought to an apartment in Portarlington.

Giving evidence via video-link through an interpreter, the 35-year-old woman outlined three “very traumatising” incidents for her.

She said she became very fearful following one incident in Portarlington. “I would always keep a knife close to the bed so I could protect myself.” This happened after a client beat her up after he demanded his money back after she had provided the service.

“To defend myself I got a knife and tried to get him out of the apartment. During this time, I called Lisa.”

“I had a knife in one hand and the phone in the other. She told me not to do anything to the client and I should let him leave,” the woman said.

“She was very worried about the client. She later told me I should never react when a client wanted to beat me or wanted the money back,” the complainant continued. She said Lisa was not worried about her.

The second incident happened in Enniscorthy when a “a guy wanted to come in who appeared to be very out of himself”.

She said she called the women and told them that she had a knife. They threatened to call immigration on her if she was violent towards any man because that would “bring complications”.

She said Lisa then called her and told her that she was not supposed to hurt the man. “She was very offensive and she threatened me,” the complainant said.

She said in her final week in Portarlington she had a sore throat and a fever and Lisa told her that a client wanted her to perform oral sex without protection. She told Lisa that she was unwell but she said Lisa did not mind.

The woman told Mr Orange that when the client arrived, she told him she was in no condition to provide that service, “so he started to assault me physically”. “It was a very intense fight. I had injuries, bruises all over my body.”

She said she managed to get the knife, and when the man said he wanted his money back she held up the knife.

“He stopped what he was doing to me. At this moment he knew I was very serious. That I was intent on defending myself so he put his hands up and left the apartment,” she said.

She said she was completely fearful and in terror and left the apartment because she was afraid the man would come back. She went to a local coffee shop and called Lisa.

She told Lisa she was very ill but she was not allowed visit a doctor or get access to medication. She said Lisa was only worried about the client. “She never asked if I was OK.”

The trial continues before Judge Patricia Ryan and a jury.